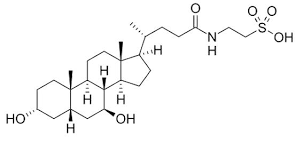 Tauroursodeoxycholic acid, more commonly referred to as TUDCA, is a bile acid that is found natrually occurring in the body. When regular bile acids reach the intestines, they can be metabolized by bacteria into UDCA and then later bound to a taurine molecule to become TUDCA.

TUDCA is a water-soluble bile acid, which is in contrast to regular bile acids possessing both water soluble and fat soluble ends and conferring a detergent effect. This is good for the bile acid’s biological purpose (emulsifying fats in the intestines to help with absorption) but when bile acids back up in the liver, a clinical state called cholestasis which occurs when the liver is unhealthy, these bile acids can be damaging to cells by destroying the membranes and signalling for cell death. TUDCA and other water soluble bile salts like UDCA compete with this toxicity and thus indirectly protect cells from death.

Only the most dedicated and serious bodybuilders have heard of TUDCA. They use it to keep their liver safe and refreshed even while using oral steroids. Since this compound is considered to be a very beneficial organ cleanser while on cycle and for PCT, TUDCA has become an ingredient in a lot of bodybuilding supplements.

The use of TUDCA dates back to ancient Asian medicine where it was used for its many health benefits, including healing sick organs. In fact, because of TUDCA’s importance, our ancestors had to figure out how to get it on a large scale, so the sick can be healed fast. They found bile extracted from a bear was the best place to get a large quantity of it.

Fortunately, in modern times, we found better ways of getting enough TUDCA to the marketplace without having to kill bears with our bare hands. As a result, it is used around the world to treat several ailments like gallstones and liver or biliary cirrhosis. In addition, ongoing research has found that TUDCA has many benefits for the eyes, heart, and organ health. Furthermore, TUDCA has shown to aid in the treatment of Parkinson’s disease.

10-13mg daily has shown to improve liver regenesis rates. Benefits have been seen at 1,750mg daily for muscle and liver insulin sensitivity, which is the highest dose used for treatment of fatty liver disease.

To the steroid user, the incorporation of TUDCA into any cycle regimen is key to help guard your body from bad side-effects. Over time, someone who has been using a moderate amount of oral steroids can put a serious strain on their liver. As the steroids pass through the liver and metabolize, they cause cell damage. The damage to liver cells by steroids can lead to jaundice and serious liver disease. In addition, steroids can directly inhibit the production and flow of bile from the liver, this is known as cholestasis. TUDCA has been used to help the bile flow (fix cholestasis) and help cleanse out the liver.

TUDCA isn’t just for use during steroid cycles. It should also be used in post cycle therapy (PCT). When you run a steroid cycle, your heart and liver are sure to become strained. Continuing to cleanse your body during post-cycle therapy, when you are off the steroids, can help you release the built up toxins. This should help you feel better and return to your health levels before the cycle started. Those that blast and cruise (BnC) can also take advantage of TUDCA, as it cleanses the liver rather effectively even during BnC runs . In simple terms, it means more blasting and less cruising.

Side effects of TUDCA are rarely discussed because TUDCA is found naturally in the body. However, it is not recommended that pregnant females or children use this supplement.

Studies have shown that TUDCA also helps with blood glucose and insulin which explains why it has become popular among the diabetic groups. In fact, another study showed it aided fat loss and helped neutralize weight in both men and women. So in other words, if you are overweight it will aid in weight loss and if you are underweight it can help you gain some lean mass.

Of course, like any other supplement, TUDCA has a lot of positive characteristics, clinically proven in certain conditions. I have not used it yet but I find it very interesting and the reviews are good. Do not expect miracles but take it into consideration if you are one of those who overload their liver for one reason or another.